No alternative to dialogue and agreement , says McGuinness in major statement on 20th anniversary of IRA cessation

Delivering a keynote address in Derry on Sunday morning on the 20th anniversary of the IRA announcing “a complete cessation of military operations”, Sinn Féin’s Martin McGuinness said there is a real threat to the political institutions in the North from political stagnation and the absence of progress. 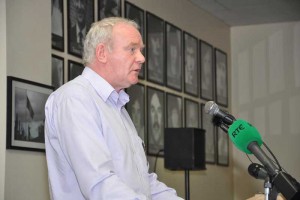 Delivering a keynote address in Derry on Sunday morning on the 20th anniversary of the IRA announcing “a complete cessation of military operations”, Sinn Féin’s Martin McGuinness said there is a real threat to the political institutions in the North from political stagnation and the absence of progress.

“TWENTY YEARS AGO TODAY. the IRA announced its total cessation of military activities. That unilateral initiative by the IRA leadership broke the cycle of conflict in this country and opened up new and challenging possibilities.

“But the subsequent success of the Peace Process and the transformation of politics across this island and between this island and Britain that flowed from that courageous initiative in 1994 were not a given. Real efforts and commitment, courage and determination and the personal engagement of key political players all played a part.

“The dialogue between Gerry Adams and John Hume was the starting point for what became the Irish Peace Process but many other played a part. In particular, Fr Alex Reid laboured tirelessly at a time of exclusion and censorship to uphold and promote dialogue.

“At the start of this week we buried Albert Reynolds, Taoiseach at the time of the cessation in 1994. Albert played a key role in laying the essential groundwork for that initiative. He personally discarded the failed and disgraceful policy of isolation, censorship and repression that had been the traditional response of the Irish Establishment to the conflict. The abandonment of Northern nationalists by successive Irish governments to the excesses of the Orange state was one of the key drivers of conflict in the North. Albert Reynolds changed that policy and authorised direct discussion between his office and Sinn Féin and it is his courage in taking this step that sets him apart.

“So also with Tony Blair and President Clinton, who challenged those who were wedded to the failed policies of isolation and repression.

“The collective efforts of these people, senior political leaders and ordinary citizens led ultimately to the transformation of the political landscape on this island. And despite the ongoing difficulties, no one should gainsay or underestimate the progress which has been achieved, especially given the ongoing conflicts elsewhere.

“Despite our obvious political differences, I want to commend today all those involved in our successful peace process, from all parties and none.

“As Irish republicans, we entered the early stages of the Peace Process with the deepest (and healthiest) scepticism about British intentions. Some small dissident republican groups remain wedded to conflict and the past despite the political transformation of our society. Successive agreements supported by the vast majority of the Irish people have removed any rationale for armed struggle and have put in place peaceful and democratic alternatives.

“In 1994, dialogue offered the only way out of perpetual conflict and Irish republicans entered that dialogue confidently. I would urge dissident republicans still committed to armed actions to take that same step in 2014 into politics and away from conflict. There can be no return to the violence and repression that scarred this society for so long.

“A commitment to dialogue and the confidence to enter that dialogue as Irish republicans but with a willingness to listen to the perspectives of others are critically important elements in the progress we have made so far.

“And the absence of dialogue and a commitment to dialogue as the way to overcome disagreements is at the heart of the growing difficulties we are now facing in the Peace Process across a range of key issues. Rather than making progress on the issues of identity, parading and the past by building on the enormously important work carried out by Richard Haass and Megan O’Sullivan, the DUP and UUP have now retreated into a coalition with rejectionist unionism and with loyalist paramilitaries.

“This coalescing of unionism and loyalism around negative politics has its origins in the anti-democratic protests that followed the decision of Belfast City Council to change the policy of flying the Union flag every day of the year.

“The deterioration in political relationships has it origins in the inability of unionism to accept and come to terms with a democratic decision taken by Belfast city councillors. The decision to restrict the flying of the flag to designated days is, of course, a compromise position – a  compromise which Sinn Féin was prepared to support. But the unionist parties have been incapable of accepting this compromise and have railed against this democratic decision. And it is that failure – the failure to accept a democratic decision, the failure to work towards compromise, the rejection of dialogue and negotiations to resolve contentious issues – which is now at the heart of the problems that we are facing.

“Political unionism has walked away from dialogue and has now adopted the Orange Order’s position of setting down preconditions and predetermined outcomes for any discussions. The failure of the Orange Order to enter a process of meaningful engagement with the local community in Ardoyne is now mirrored in the politics and make-up of the pan-unionist coalition. Dialogue is now contingent on an Orange march being allowed to parade through a nationalist area of north Belfast.

“And the rejection of dialogue and negotiations has spread like a virus to all other issues, including those already agreed such as the development of the Maze/Long Kesh site. Similarly with welfare cuts.

“The DUP position is that because they have accepted the anti-poor agenda of the Tory millionaires in London, we should all accept cuts to the income of the most vulnerable in our society. They have rejected any further discussion on welfare cuts which the British Government are trying to impose on the Executive and which are no part of our agreed Programme for Government.

“And let me be absolutely clear – Sinn Féin is totally opposed to the Tory welfare reform programme because it is a right-wing, ideologically-driven attack on the poorest and most vulnerable in our society. These welfare cuts would undermine the rights and entitlements of many within unionist and loyalist communities and whole families would be plunged into deeper poverty through reduced support and cuts to their benefit payments.

“Three times in the last six months, the DUP have threatened the political institutions if they do not get their own way. The first time around the issue of OTRs; the second in response to the Parades Commission’s decision to restrict the Orange parade on the Crumlin Road; and the third on the issue of welfare cuts.

“But the real threat to the political institutions is stagnation and the absence of progress. The real threat is the retreat of political unionism from dialogue, compromise, agreement and reconciliation. And none of this is about abandoning sincerely-held political beliefs or positions.

“Republicans have recognised that agreement and compromise is about building a better future for all our people. It is about reconciliation and learning to live with our different political perspectives and beliefs.

“I have personally tried to understand and reach out to the unionist population, not least in my engagements with Queen Elizabeth. But reconciliation is not a one-way street. Unionist leaders need to engage in similar initiatives. “They need to reach out to the republican and nationalist traditions and to the new and diverse communities that increasingly make up our modern society.

“So there is an enormous onus on those who recognise the enormous progress we have made, and continue to make, since the IRA cessation in 1994 to make their voices heard. The obvious goodwill and support for partnership government and for a shared future which exists needs to manifest itself much more tangibly right across civic society in the North of Ireland. And the supporters of the agreement internationally, in particular in the United States of America, need to reassert their interest and influence.

“The negative anti-agreement axis must understand that there will be no return to the past, that the days of one-party rule, of domination and repression, are over and will never return.

“There needs to be a renewed focus by those who support agreement. These are the challenges for all of us as we enter a new term in the Assembly but I am convinced that we can find a resolution to all the difficulties facing the political process. This will require focus, attention and patience but, through genuine engagement by all parties and a hands-on approach by the British and Irish governments, progress can be made.