Sinn Féin’s Spokesperson on Childrens Affairs, Sandra McLellan said that she was delighted to support Anti-Bullying Awareness month which began at the beginning of March.

Speaking today after the Irish Society for the Prevention of Cruelty to Children (ISPCC) met with Members of the Houses of the Oireachtas to highlight the initiative, Deputy McLellan said:

“The issue of bullying is increasingly a very real problem for a large number of children in Ireland. With the surge in children’s and teenagers’ access to interactive and social media, the reality of bullying has become a huge challenge to deal with not only within schools but also during children’s free time.

“In March 2012 the ISPCC launched their Shield Anti-Bullying Campaign, to work towards protecting children from bullying. Their services not only provide young people with the necessary coping skills to deal with and protect themselves from bullying, but also help empower them.

“The successful Shield Anti-Bullying Campaign is now in its fourth year and almost 200 schools across Ireland have availed of the Shield My School Anti-Bullying Toolkit. This is a great success and I commend the ISPCC for such a forward thinking initiative.

“Today, I along with Sinn Féin and other Oireachtas Members took part in the important initiative at Leinster House to highlight the issue during Bullying Awareness Month of March.

“I hope the focus remains on tackling bullying not only during this month but for the months to come. It deserves commitment from us all.” 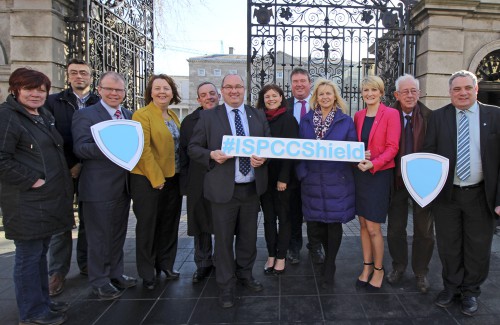