inn Féin TD and spokesperson on Foreign Affairs Seán Crowe, after meetings with the organisers of the Toys for Gaza initiative, has pledged his full support for their fundraising drive in order to ensure that the toys can be delivered. Crowe was joined at the event by TDs and Senators from Sinn Féin, other Oireachtas members, and the Palestinian Ambassador to Ireland

Toys for Gaza is a grassroots initiative set up after Israel’s bombardment of Gaza in July and August which killed over 2,200 people, and over 550 were children.

“The Toys for Gaza group have spent weeks collecting new and usable toys for children in Gaza, where high unemployment, blockade by land, sea and air and the constant threat of attack makes it impossible for families to provide basic items for their children’s happiness.”

“Toys are a crucial part of any childhood and the people of Ireland have responded so generously that seven forty foot trucks with medical supplies, toys, clothes, educational items, books, bikes and prams, and all manner of baby care items, are now in storage in Dublin waiting to be shipped abroad to Gaza.”

“In order to deliver these supplies and to avoid paying high storage fees the Toys for Gaza group need to raise €30,000 urgently.”

“Members of the Oireachtas have come together with the Palestinian Ambassador to call on people to support this final fundraising drive and to give what they can in order to ensure that this precious cargo reaches Gaza.”

“You can find out more about Toys for Gaza and how to donate on their facebook and twitter pages, as well www.gazatoydrive.org” 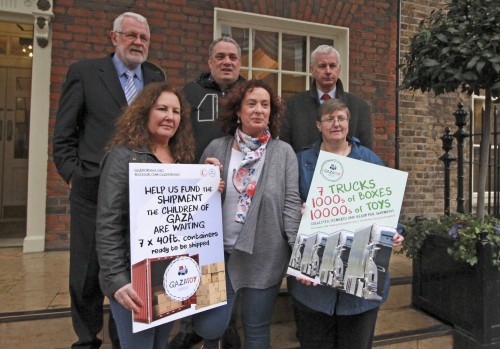