Sinn Féin Finance Spokesperson Pearse Doherty TD has reacted angrily to a parliamentary reply from the Minister for Justice in which she makes clear the government has no intention of taking action against financial services who advertise on their website as “being in a lightly regulated environment”. Deputy Doherty said the website’s assertion is sadly still accurate.

“In the Ireland of 2015 it is unacceptable that a wealth management body which presumably deals with huge amounts of money can openly be selling itself as operating “in a lightly regulated environment”. While there is unfortunately a lot of truth in the statement the company should not be allowed to sell itself on this basis.

“The broader issue here is that sadly the website is accurate in its statement about being in a lightly regulated environment. Despite the economic turmoil of the last number of years in the financial sector a company can still, proudly it seems, boast that Ireland provides light touch regulation. That fact should act as a call to action to the government and regulator to look again at the regulatory regime for these bodies.

“The website, recently brought to my attention, belongs to a financial services firm in Dublin which is advertising itself to wealthy clients by selling itself as operating “in a lightly regulated environment.” I raised this issue with the Minister for Justice who is responsible for the licensing of these Trust Management companies in the State. Her answer shows a complete lack of interest in dealing with the issue I raised.

“How we sell ourselves as place to do business is an important part of an economic policy. The days of Ireland being seen as a wild west for regulation should be put well behind us. A grown up regulatory environment is required and expected of us. This type of blatant cowboy advertising and the tolerance of it by government should be consigned to the past. Moreover the existence of a regulatory environment where such statements are true and accurate should be tackled. It does damage to our reputation and that fact should outweigh any other consideration given the international scrutiny Ireland is currently under.”(See attached file: Thomondview.png)

*  437.  To ask the Minister for Justice and Equality the number of trust or company service providers authorised by her Department; her views on the website of a company (details supplied) which advertises on the basis that it operates in a lightly regulated environment without the costs or inconveniences associated with an offshore jurisdiction..

*  419.  To ask the Minister for Justice and Equality her views on the website of a trust management company (details supplied) which advertises on the basis that it operates in a lightly regulated environment without the costs or inconveniences associated with an offshore jurisdiction..

I wish to inform the Deputy that a total of 298 entities are currently authorised to operate as Trust or Company Service Providers (TCSPs) under the provisions of the Criminal Justice (Money Laundering and Terrorist Financing) Act 2010 as amended by the Criminal Justice Act 2013.

Authorisation to operate as a TCSP, which is granted by me in my role as 'State Competent Authority' under the above Acts, is in respect of money laundering controls only. It is the function of the State Competent Authority to ensure that entities such as TCSPs are compliant with anti-money laundering measures specified in legislation; this function is discharged through a compliance monitoring regime and the taking of measures that are reasonably necessary for the purpose of securing such compliance. To give effect to the role of the Competent Authority under the Act, the Anti-Money Laundering Compliance Unit was established in my Department on the enactment of the Act and Authorised Officers have been appointed under Section 72 of the Act.  Authorised Officers have wide-ranging powers under the Act to determine the position with regard to the compliance standing of entities authorised to carry on business as TCSPs.

In the specific case referred to by the Deputy I can confirm that this entity was granted authorisation in 2012 for a period of 3 years with a request for a renewal of that authorisation currently pending.  During that 3 year period the entity was subject to an inspection by an Authorised Officer of the Anti-Money Laundering Compliance Unit in my Department.  The Officer was satisfied that the entity was fully compliant with the provisions of the Criminal Justice (Money Laundering and Terrorist Financing) Act 2010 as amended by the Criminal Justice Act 2013. 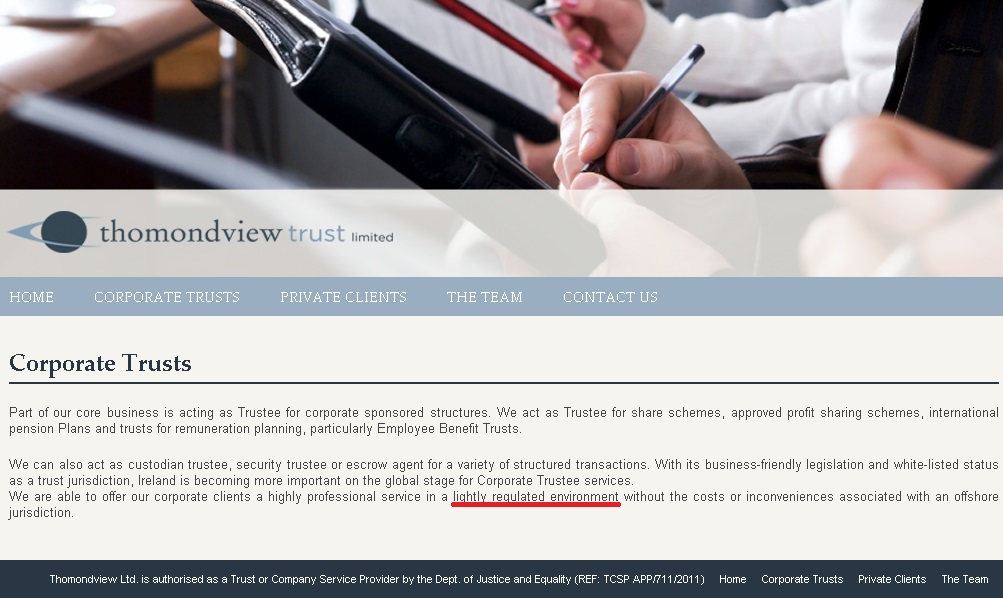