Family Carers must be supported by Government – Adams

Speaking after his discussions with the carers,

“I want to commend the crucial role played by carers in our society. Without their dedication and commitment many of our most vulnerable citizens would face huge difficulties and even greater hardship.”

“There are around 60,000 people in receipt of a carer’s allowance. And it is estimated that there are almost 200,000 family carers across the state. Cuts to the Carer’s Allowance, to Carer’s Benefit and to the Respite Care grant have caused huge hardship for families.”

“In opposition Fine Gael and Labour opposed similar cuts by Fianna Fáil but embraced austerity and imposed further cuts when they came to power in 2011. In 2013 the Respite Care Grant was cut by almost one fifth and the Household Benefits Package has been slashed by 40 per cent since 2011.”

“During this time the government has re-orientated healthcare to move disabled or elderly or sick citizens out of hospitals and institutionalised care and back into the community. This is in part because of the crisis in hospital Emergency Departments where there is a shortage of beds because of delayed discharge patients, and because community care and care in the home is cheaper.”

“However, the government is failing to provide a satisfactory income for carers or suitable services for those they care for.”

“According to the Carers’ Association, there are over 7,000 people waiting on a Housing Adaptation Grant, Mobility Aids Grant or Housing Aid for Older People. There are almost 9,000 older people, people with disability or medical conditions on the housing waiting list. And under Fianna Fáil and then under Fine Gael and Labour over one and a half million home held hours have been withdrawn.”

“In the National Carers Strategy 2012 the government promises that; ‘Carers will be recognised and respected as key care partners. They will be supported to maintain their own health and well-being and to care with confidence. They will be empowered to participate as fully as possible in economic and social life’.”

“The impact of government cuts to key supports for carers means that it has failed to deliver on this commitment.”

“It is patently clear from my discussions with Jacqueline and with the group I met today that carers are simply not receiving the support that they deserve from this Government. They have to fight for every benefit and support. They speak of spending endless hours trying to fill in forms and negotiate red tape, and of feeling isolated and lonely.”

“This is unacceptable particularly when we consider the vital role which carers fulfil every single day. Carers Ireland estimates that each family carer saves the HSE in the order of €72,500 per year through the care they provide to loved ones.”

“Across the State it is estimated that each year family carers provide €4 billion worth of care and support to people who are ill, frail or suffer from disabilities.”

“The combination of stealth taxes, including the family home tax, cuts to welfare payments, and a significant reduction in support services, has meant that carers have seen their income drop, their costs increase and available services have been slashed. This is unfair, unacceptable and an attack on the most vulnerable in our society.”

“Sinn Féin is calling for the full restoration of the Respite Care Grant and for an increase of three weeks to the fuel allowance; we believe the 24,000 family carers on the Half-rate Carers Allowance should be recognised by the government as a core social welfare payment and it should be protected. And we have called for increased investment in Health Services for their loved ones.”

“Carers provide a vital service for society. It is time there exceptional role as care givers was recognised by government and the necessary supports and funding provided to ensure that all of our citizens enjoy a decent quality and standard of life.”

“I was delighted to visit the Dáil today and to meet Gerry Adams.  I have a 6 year old daughter called Séanadh who has been diagnosed with a rare chromosomal condition called 3p Syndrome.”

“Our family has faced an uphill struggle to access support services for Séanadh, in particular speech and language therapy which is so essential for her development.  I have brought this issue to the attention of Gerry Adams and he has assured me that he will raise it with the Government.” 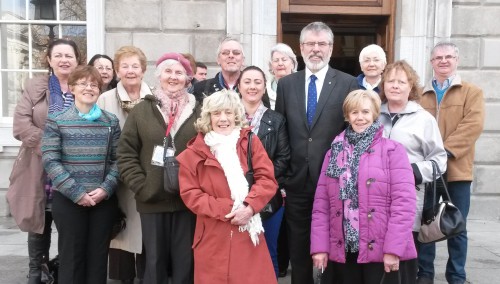