“In just five weeks’ time two referendums will be held. One is to reduce the eligibility age for a candidate for the Presidential elections. The second is on marriage equality. Sinn Féin is calling for a Yes vote in both referendums.

We will be running a vigorous campaign. The Party will be distributing around half a million leaflets; at least five thousand posters and the party in every constituency will be carrying out a thorough canvas. 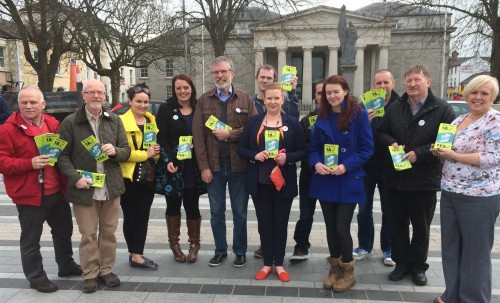 In respect of the Marriage Equality Referendum, many of us will have a member of our family or extended family who is gay. All of us, whatever age we are or wherever we live or work, know someone who is gay.

They want what we want – the right to live their lives as full and contributing citizens and to share in the love of a family of their own.

A Yes vote for same sex-marriage is about recognising people’s right to equality; respecting their right to express their own sense of identity; and is about affirming their right as citizens to be free, equal and happy.

There is a possibility that some citizens who are so angry at this government will see this as an opportunity to hurt Fine Gael and Labour. I would appeal to them not to do this. This referendum is not about those parties it is about the rights and entitlements of our family members, our friends, our neighbours and workmates.