Cork East TD Sandra McLellan has recently taken on the role as Children and Youth Affairs for her party. The Sinn Féin Dáil Deputy has replaced party colleague Caoimhghín Ó Caoláin TD, who will now concentrate on his responsibilities as Health spokesperson. Deputy Ó Caoláin has had the Children and Youth Affairs role for the past 13 years along with the Health portfolio.

Deputy McLellan, who will now shadow Minister for Children and Youth Affairs, James Reilly TD, is also the party spokesperson on Arts and Heritage. One of only two female Sinn Féin Dáil Deputies, she is in the words of Deputy Ó Caoláin, “a very able and hardworking Deputy in whom I have every confidence”.

“I have worked closely with Sandra over these past couple of years in particular, we are both members of the Joint Oireachtas Committee on Health and Children. I have noted Sandra’s attention to detail and her respectful engagement with all who present before us and her growing confidence as a proud representative of the electorate of Cork East” concluded Deputy Ó Caoláin, who preceded Party President Gerry Adams as Sinn Féin Dáil Leader over a period of nine years, until the 2011 General Election. 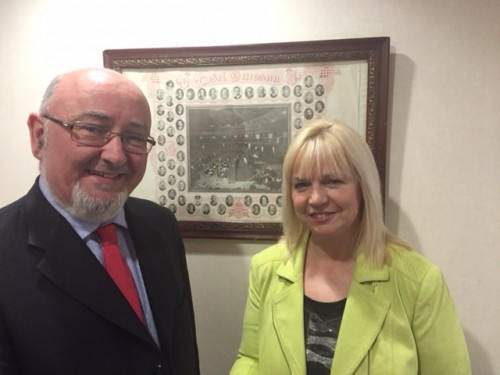