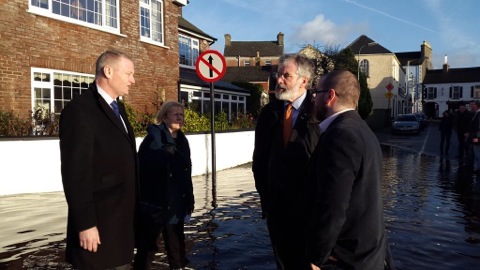 The Landmark Hotel, Cryan’s Bar and Restaurant and homes in St. Patricks Park where residents are penned in by flood water and where the council is building a scaffolding walkway.

The Sinn Féin Leader later visited other businesses affected by flooding including the offices of the Leitrim Observer offices and a medical centre.

In Cortober, he met with the owner of the Carrick-on-Shannon Cineplex Liam Farrell and visited Supervalu and viewed the effects of flooding.

Speaking afterwards, Gerry Adams repeated his earlier call for the Government to access the EU Solidarity Fund with immediate effect and for the reversal cuts to the OPW’s flood risk management programme.

“The devastating effect on businesses and homes caused by the recent flooding is clear here in Carrick-On-Shannon.

“The Government has failed to deal with this issue in a strategic way and, as a result, we are seeing a repeat of problems we saw several years ago.

“Cuts to the flood risk management programme have resulted in a reduction of €15.6 million in flood relief. This is unacceptable.

“Accessing the EU Solidarity Fund to help residents and businesses should be an immediate first step but cuts to the budgets for managing this type of situations must be reversed.”