Responding to a parliamentary question which showed that there were nearly 70% less jobs in IDA companies in Monaghan in 2015 than in 2006, Sinn Féin Senator Kathryn Reilly said this was endemic of failures of successive Governments to secure real and long-term investment.

“In 2006 there were 484 jobs in IDA supported companies in Monaghan. Then, at the end of 2015, there were only 146. This represents nearly 70% of a decrease. Indeed, the decrease in these jobs is most noticeable under the Fine Gael/Labour Government as jobs went from 352 in 2011 to 146 at the end of 2015. This is not keeping the recovery going by any means.

“Unfortunately, this is endemic of the failures of successive Governments to secure real and long-term investment. Monaghan only received two IDA visits in 2015, and that came on the back of not receiving any in 2014. Indeed, since 2008, there have been 4 IDA Ireland sponsored site visits to Monaghan and 10 to Cavan.

“Counties such as Cavan and Monaghan suffered disproportionately from the economic downturn, with unemployment rates and emigration well above the state wide average. It would appear that the inaction of the enterprise agencies to bring potential investors is exasperating the regional disparities in employment. Such examples can be seen in the closures of plants like BOSE, and with nothing to replace them Cavan and Monaghan are being left even further behind.

“Fine Gael say they want to keep the recovery going but it is clear that in Cavan and Monaghan we are getting more of the same, and that is not translating into positive news for investment. In our manifesto, Sinn Féin have committed to developing a new enterprise spatial strategy to orientate infrastructural development and IDA and Enterprise Ireland development in a balanced regional manner.

“Similarly, we will set ambitious targets for regionally balancing foreign investment and delivering an integrated enterprise policy that maximises the growth potential of domestic entrepreneurs and businesses.”

The information on waiting times for assessment and for treatment at the end of Quarter 3 of 2015 is shown in the tables below.  The information is collated by the HSE by region and for the intervals as shown. 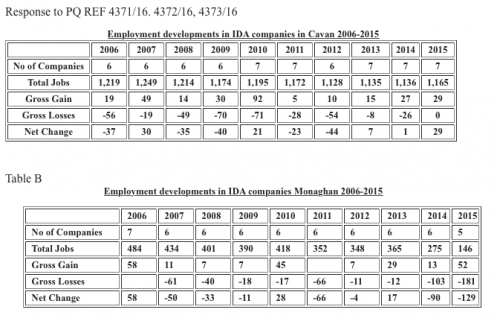