“Minister Coveney’s Housing Action Plan which was launched today is better than his predecessor Alan Kelly, but still not good enough.

“The real increase is to €1.29bn up to 2020 and €1.54bn up to 2021. This is a crucial difference because these figures will determine the ability of Government, local authorities, and approved housing bodies to deliver the social houses that people need.

“Initial calculations suggest that Minister Coveney’s plans will produce up to 6,000 real social houses a year for six years. This falls far short of the annual target proposed by the Dáil Housing and Homelessness Committee of 10,000 real social housing units a year which if adopted by Minister over six years would have delivered 60,000 units.

“Minister Coveney is falling short of the Dáil Housing and Homelessness Committee recommendations by 40%.

“More worrying is the fact that the increase in Capital Spending on Social Housing next year is a mere €150m. Given the relentless rises in the numbers of people in emergency accommodation, living at risk of homelessness and languishing on local authority waiting lists this increase is simply not enough.

“There are welcome initiatives in other areas of the plan, particularly in relation to homeless services, addressing the 189,000 vacant private units and actions for those facing repossession from banks or vulture funds. However these measures are still far too modest. 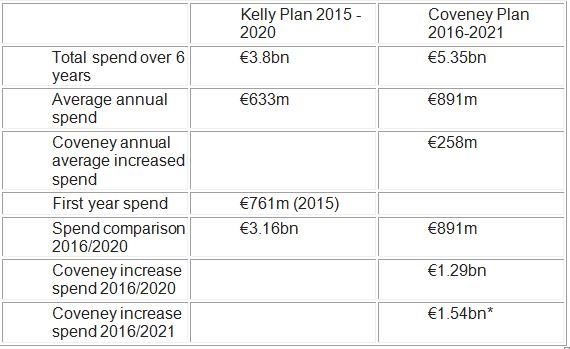