Sinn Féin Dublin Mid-West TD Eoin Ó Broin has welcomed a ‘breakthrough in the Balgaddy community garden’ His comments come on foot of a proposal made to South Dublin County Council by the Dublin Diocese.

“The dispute over the ownership of the land at Balgaddy Community Garden has been ongoing now for over a year. It has caused great anxiety and anger within the local community.

“Sinn Féin along with others have been working both formally though the Council and informally through meetings with others to try and resolve this matter.

“Earlier this year having requested a formal legal opinion from the Council on the matter I proposed that the Council write to the St Laurence O’Toole Trust seeing if they were willing to reach an agreement with the Council that would resolve the situation. The proposal involved a new agreement that would allow the land on which the Community Garden is located to remain in public ownership.

“I am delighted that the Dublin Diocese have now made a formal proposal to South Dublin County Council which I believe will resolve the dispute. IO want to commend those involved within the Dublin Diocese who have worked hard on this matter behind the scenes for a number of months.

“The proposal would  involve a new Section 183 land disposal that would give the Dublin Diocese legal title to the land which is currently being used for car parking while leaving the land where the community garden is situated in the ownership of the Council. Any future development of the Bush Centre would take place on the site where the centre is currently located.

“In my view such a package would represent a significant gain for the local community and on that basis I believe that the Council should waive the original fee from the 1997 land disposal. The proposal represents a victory for common sense and will go a long way to building the strained relationships between the parish and the local community.

“I would urge the Council and Councillors to support this proposal and adopt a new Section 183 Land Disposal as soon as is possible. I would also urge the Council to enter into an agreement with the Balgaddy Community Garden to regularise their use of the land to give this valuable project the security it deserves.”

Note to editor: Map of proposal from Dublin Diocese attached. 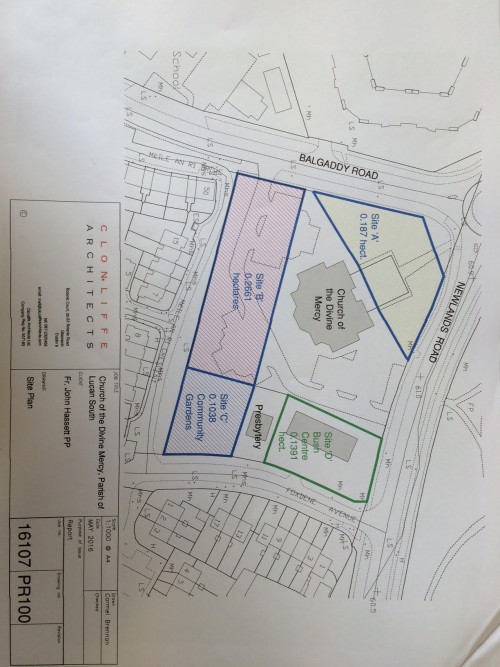