Sinn Féin Finance Spokesperson Pearse Doherty TD has said information released to him by the government show that the top 500 public sector pensioners cost €50m a year. He described the figures as “obscene”.

“It is obscene that the top 500 public sector pensioners cost the State €50m last year and do presumably each year.

“This spend on such a small number of people could provide medical cards for all seriously ill children twice over or make a big impact on waiting list times or in tackling the homelessness crisis.

“What impact would that €50m have if spent on recruiting Guards or nurses? These are political choices ultimately.

“It is especially obscene as the economy struggles with low pay and the scars of austerity that the top few public sector pensioners are reaping such big payments; presumably those 500 include many former politicians whose actions cost the Irish people so much. In fact, given the size of the country, an informed source could almost name the individuals costing such a huge sum of money each year.

“If nothing else the figure gives a lie to the idea that we all suffered equally or that even the very top need a break. They do not; they are still protected and getting huge pensions each year.”

Note: The PQ in question is below

QUESTION NO:  507
DÁIL QUESTION addressed to the Minister for Public Expenditure and Reform (Deputy Paschal Donohoe)
by Deputy Pearse Doherty
for WRITTEN ANSWER on 19/07/2016

To ask the  Public Expenditure and Reform the number of persons, in increments of €5,000, in receipt of public service pensions; and the corresponding amount of annual individual pension payments within the same category.

Based on available non-personal data (2013) sets, making reasonable projections as to retirement and mortality rates, and incorporating the Public Service Pension Reduction amelioration provided by the Financial Emergency Measures in the Public Interest 2015 Act in the cost, the estimated number of public service pensions in payment and cost per incremental bands of €5,000  is detailed in the Table below. Current data sets are being updated in line with EU requirements to provide an estimate of the accrued public service pension liability at 31 December 2015. 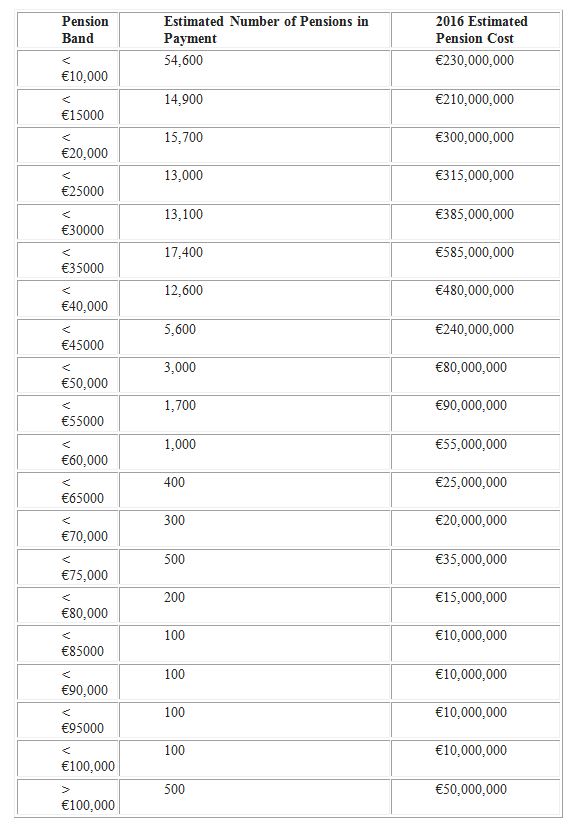