Sinn Féin Finance spokesperson Pearse Doherty TD has said figures released to him show that 68% of debtors who have exited NAMA did so having paid off less than half their debts.

“New figures I have received from the Minister for Finance show that nearly 70% of the 505 debtors who have exited NAMA have done so having had more than half their debt still owed. These debtors originally owed €27.3bn although NAMA would not have paid significantly less than that price. Of that debt only €14.9bn has been recovered.

“NAMA’s mandate is to recoup as much money as possible from its debtors for the Irish people. Shockingly 51 debtors exited having paid 10% or less of their debts while 225 debtors paid off less than 30%.

“That is a far cry from the Brian Lenihan commitment that debtors would pursued ‘to the ends of the Earth’. The NAMA strategy, under direction from the Minister, to offload assets earlier than originally planned means that, in many cases, it has been the vulture funds that have benefitted from repayments from these debtors in a recovering property market.

“That strategy is now in question more than ever before. Sinn Féin is calling for a freezing of NAMA sales until a new policy is developed which will make sure the taxpayer receives the maximum value from what is left on NAMA’s book and which mandates NAMA to play a serious role in solving our housing problem.” ENDS

To ask the Minister for Finance the number of persons and corporate entities debtors whose total repaid debts upon exiting NAMA were at certain loan book values (details supplied) with regard to NAMA debtors that have exited the agency up to January 2017, having repaid their debts to NAMA, in tabular form; and if he will make a statement on the matter.


I am interpreting the Deputy's question as requesting the number of NAMA debtors who have exited the agency organised by reference to the amount repaid at the time of exit from NAMA as a percentage of the total par debt owed to NAMA.  In this regard, I am interpreting your reference to "total original loan book value" in the details supplied to the question as the total par debt owed to NAMA at the time NAMA acquired the loan.

I am also interpreting "exit from NAMA" to include both the establishment of a final agreement with NAMA or the sale of the loan.  The percentages provided reflect the amounts which had been repaid to NAMA as a percentage of the original amount owed to NAMA and are calculated at the time a final agreement was reached with NAMA or at the time loans may have been sold by NAMA (i.e. loan sale proceeds are not loan repayments.)

The Deputy will be aware that NAMA originally paid €31.8 billion to acquire a loan book with a par value - that is an outstanding borrowed amount - of €74 billion, comprising 779 debtor connections.  These loans had a market value of €26.2 billion, roughly 35% of par.

It was never envisaged that NAMA would recover anything close to the €74 billion par value of the loans.   The average discount was 57%.  However, the acquisition discounts varied significantly depending on the underlying quality of the assets. 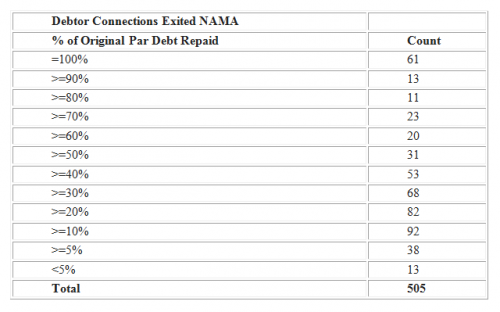