Commenting today in the Dáil, Sinn Féin Spokesperson on Education and Skills Teachta Carol Nolan raised the issue of the DEIS plan and the shortage of NEPS psychologists with the Minister for Education. Teachta Nolan revealed that the figures provided to her previously were incorrect and that the number of schools that do not have access to a NEPS psychologist were much higher.

“I have a number of concerns with the DEIS plan published by the Minister this week.

“Firstly, the plan will not even restore the level of funding to DEIS schools to 2015 levels. There is no plan to restore the rural co-ordinator service and the provision of a paltry 10 NEPS psychologists is not sufficient to address the specific complex needs of DEIS schools.

“Figures provided to me last month by the Department of Education revealed that 544 schools across this state do not have access to a NEPS psychologist for the purposes of carrying out an assessment.

“However, it appears that the shortage is higher than originally thought. I have been contacted by NEPS this week to advise that the figure is much higher and that, in fact, a total of 619 schools across the state do not have access to a NEPS psychologist.

“It is abundantly clear that there is no economic recovery for children from disadvantaged communities or for children who require an educational assessment by a psychologist.

“This Government has failed on a fundamental level to protect the most vulnerable of children; to give them an equal chance to achieve their potential within our education system.

“This Government needs to reconsider the level of funding to DEIS schools, reinstate the rural coordinator service and commit that every school across the state will have access to a NEPS psychologist.”

Count by County of schools who do not currently have access to a NEPS Psychologist for the purposes of carrying out an educational assessment (ref: 13/1/17) 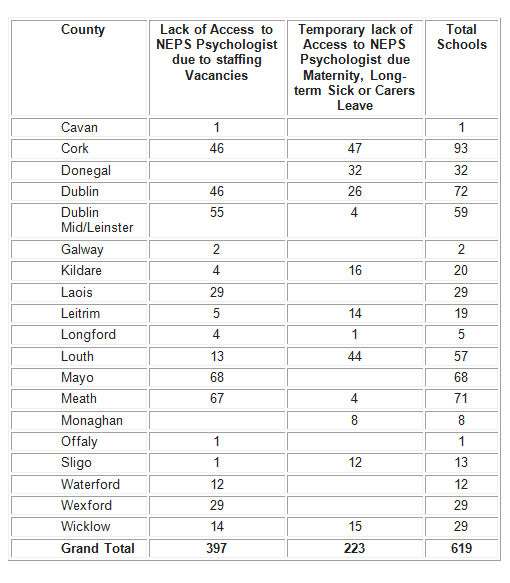