It convened two weeks out from four important by elections in the southern state, and in the middle of a Westminster general election across the north.

The chaos within British politics has brought that about.

Still no one knows, what is likely to happen next – will Boris Johnson get a majority and honour his deal with the EU27?

Everything is up in the air. 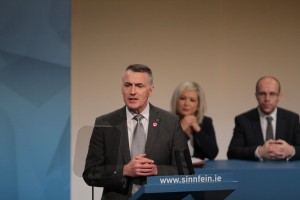 In the north, unionism has whipped up a toxic, sectarian electoral frenzy, and have used it to maximise sectarian polarisation.

Candidates and their families, and, particularly, Sinn Féin Mayor of Belfast and North Belfast candidate, John Finucane, are being disgracefully vilified and demonised.

Those within political unionism and the various paramilitary crime gangs who are driving this poisonous agenda are trying to increase communal tensions, heighten fears and deepen sectarian segregation.

We must not let them succeed.

Those of us committed to a better society need to rise above their sectarianism and bigotry, and continue to promote inclusion, anti-sectarianism and, most importantly, a positive vision of hope.

This was the consistent tone used by speaker after speaker at the Ard Fheis as they discussed the prospect of Irish unity.

Each contributor expressed a positive vision of inclusivity and generosity.

Against that backdrop, it was even more important that delegates to the Ard Fheis adopted as national policy the new document ‘Inclusion and Reconciliation in a new Ireland’.

This is the third such policy position on reconciliation and anti-sectarianism to be brought before an Ard Fheis in recent years. I commended this latest substantive document to our party delegates and began by reminding them of the collapse of the Berlin Wall just over 30 years ago and how that gave way to the reunification of Germany shortly afterwards.

Next February we will mark another historic milestone in the 30th anniversary of Nelson Mandela's release from prison. 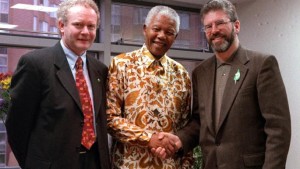 By 1994 national democracy was established in South Africa.

Few of us could have predicted such epoch making events 35 or 40 years ago.

But as Mandela said himself;

"It always seems impossible until it's done".

Those words have relevance for today's Ireland.

British state policy towards Ireland has for centuries adversely affected the development of democratic politics and social progress.

British government interference in Irish affairs is at the root of conflict and instability throughout our country's history.

It is an important fact to acknowledge that no reconciliation process was ever put in place after the 1922/’23 civil war, or the preceding Tan war.

Our most recent and devastating phase of conflict has yet to be reconciled or healed.

Britain's partition of Ireland is the central fault-line at the heart of Irish politics and society.

It has been a disaster for all our people.

In the south a theocracy emerged and existed for decades.

The northern state institutionalised sectarianism in every fabric of society to maintain the dominance of a conservative unionist elite. 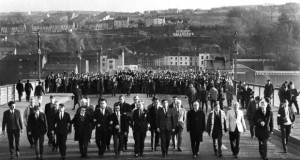 Sectarian discrimination in employment, sectarian segregation, inequality and division became the hallmarks of that state.

Today the sectarianism which defined the nature of the northern state after partition still exists.

However, the Good Friday Agreement (GFA) drew a line under political conflict, and also set forth a vision of a rights based, non-sectarian future.

And, in spite of unchanged opposition from within political unionism, and a failure by both the British and Irish governments to fulfil their obligations as co-guarantors to implement the Agreement, it still represents a transformational road map.

Today the political landscape is changing rapidly across this island.

Brexit has changed everything.

The Brexit hurricane has swept away all the established constitutional, political and economic assumptions about the status quo. 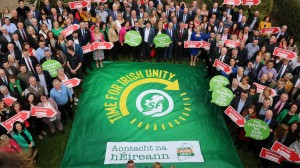 Brexit, demographic changes, the demise of the unionist electoral majority, and refusal of political unionism to support proper power sharing and a rights-based society, have changed the context of the north.

Partition is rapidly running out of road.

Brexit has brought the prospect of Irish unity into stark focus.

As a result, a debate on constitutional change is now centre stage.

Significant figures within political and civic unionism are reflecting publicly on Irish reunification.

Hugely significant academic studies and economic modelling have been published on Irish unity.

New voices within Irish civic society are becoming involved in the discussion.

The reality is, Britain's partition of Ireland is now a European issue.

A watershed has opened up in the politics of Ireland, and in political relations between Ireland, Britain and Europe.

This potential for constitutional and political realignment gives us a once in a lifetime opportunity to collectively shape a new society which is influenced by every citizen.

The GFA makes provision for a unity referendum to enable constitutional change and bring about Irish unity.

Irish reunification is a reasonable and achievable democratic outcome, but it needs to be strategically planned.

The failure to ensure that Britain's Brexit referendum campaign was properly informed, and then the failure to plan for its aftermath, should serve as a lesson on how not to prepare for constitutional change in Ireland.

The consequence for Britain has been constitutional chaos in its political system and massive polarisation in society.

Creating the positive conditions in which a unity referendum is held will be as important as the result.

The process which guided the Scottish government's approach to its independence referendum offers a template for the type of informed national dialogue which is required in Ireland.

That means addressing sectarianism in all its forms; promoting reconciliation; and dealing with the legacy of the past.

It means a process of discussion including the broadest cross section of political and civic stakeholders, and citizens.

I believe we should be discussing how to guarantee economic justice in a new Ireland; how to fund universal health care; let's ensure a progressive labour agenda is put at the heart of constitutional change; and, let's engage on how to harmonise a rights-based framework within a new constitutional democracy. 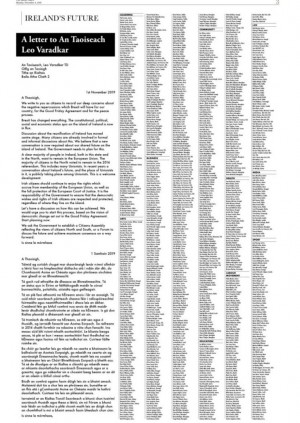 A national citizens' assembly convened by the Irish government, as over 1,000 Irish citizens recently called for in a public appeal to An Taoiseach, Leo Varadkar, should set the context for eventual negotiations about our collective future on the island, and the thoughtful compromises which need to be explored and agreed with our unionist neighbours.

The British state has never cared about the welfare of citizens in the north of Ireland.

It does not even care about those citizens who to date have given allegiance to the union and the British state.

Unionists living in Ireland will always have more influence in any negotiation with Irish republicans about the future of this space we share, than with any English politicians.

Sinn Féin has prepared detailed thinking for a unity referendum as a next step in the transition to unity.

We do not own, or claim to own the process of constitutional change.

But we do have a clear vision, of a new and agreed Ireland which guarantees the rights of all citizens; and which affirms, values, and respects diversity and difference.

Partition and sectarianism are the biggest barriers to achieving a new, inclusive, national constitutional democracy.

For as long as we fail to successfully tackle sectarianism and division, then intolerance, bigotry and fear will continue.

The potential for more instability and conflict will be ever present.

As republicans in the tradition of the United Irishmen and women, of Connolly and Mellows, we must be driven by an absolute commitment to anti-sectarianism now and in the future.

We demand a zero tolerance towards sectarianism, racism, antisemitism, homophobia, or misogyny in society.

The outworking of Brexit has sharpened existing deep divisions in the north and the DUP and Tory approach to this election will exasperate these.

The complex social and political fault-lines in our society have to be addressed.

The need for a reconciliation process is beyond doubt.  But its achievement cannot be taken for granted.

We believe a new phase of our peace process, based upon reconciliation and healing is required more urgently than ever.

This will demand an entirely new strategic focus to address the reality of sectarianism and sectarian segregation. 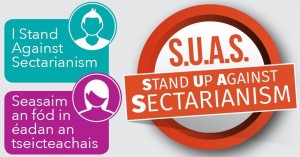 Sinn Féin’s new policy is premised upon the position that healing the divisions in Irish society is inseparable from the growing momentum for Irish unity.

So the current discourse on constitutional change should also address the challenge of developing a reconciliation and healing process.

This policy is a major contribution from Sinn Féin on how that can be done by presenting concrete proposals on tackling sectarianism; sectarian segregation; commemoration and remembrance; legacy; the role of political institutions and political leadership; public policy; and civic and community life. 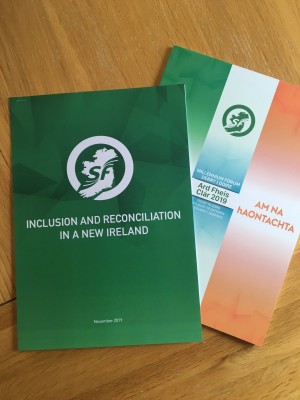 The reality is that, the past cannot be changed or undone, nor can the suffering or pain experienced in our society be disowned - by any side.

It is essential that all participants in the conflict, including British state forces, make a positive contribution to acknowledgement, reconciliation and healing.

There are victims and survivors on all sides.

There must be no hierarchy of victimhood when it comes to acknowledging the loss experienced by so many families.

For our part, Sinn Féin acknowledges the grief associated with all lives lost, and on every side.

Everyone deserves acknowledgement as a first step towards the healing process.

And while our party's preferred option for dealing with the past remains an Independent International Truth Commission, we fully support the implementation of all Stormont House Agreement legacy mechanisms.

But for those mechanisms to be implemented the British state and political unionism need to stop weaponising the past.

Some powerful sections of the British military establishment and security services are still politically and psychologically at war with the Sinn Féin leadership.

They are continuing to fight out old battles which remain locked in their own heads.

These elements of the British state should finally embrace the peace process, and stop denying their responsibility to deal with the past.

There should be an initiative of common acknowledgement by all sides, as one way to introduce a powerful new dynamic into the peace process.

During the Ard Fheis, our party restated our view that a national reconciliation strategy should be developed and implemented under the auspices of the North South Ministerial Council.

A new national conversation has grown organically about the character of that change.

Sinn Féin believes that reconciliation and healing should be central to that discussion and institutionalised within the political and civic structures of any new constitutional settlement.

However, that also places an immediate strategic imperative on the Irish government to facilitate and structure this discussion.

These are momentous times in Irish society. 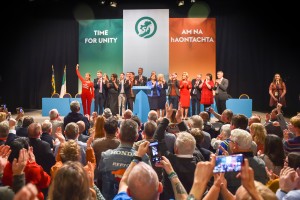 Change is in the air.

The constant theme running through last weekend’s Ard Fheis was that our generation has an unprecedented opportunity to build a future which matches the vision of the Proclamation.

Irish unity is the defining issue of our generation, the reconciliation of our people must become its lasting legacy.

Challenging as it may be, none of this is impossible.