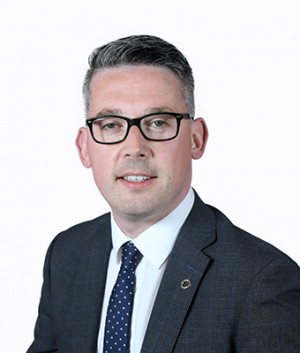 Niall Ó Donnghaile has vowed to stand up for the interests of all communities in the north and advance the cause of Irish Unity in his position as leader of Sinn Féin's Seanad group.

The former Mayor of Belfast, in his second term as a Seanadóir, was today appointed to the role by party President Mary Lou McDonald and will lead the five-strong Sinn Féin Seanad team of Paul Gavan, Fintan Warfield, Lynn Boylan and Elisha McCallion.

Speaking this evening, Seanadóir Ó Donnghaile said: "I want to thank my party for entrusting to me the position of leader of the Sinn Féin Seanadoírí. It is a recognition of the political importance of the north that the team here is led by a northerner.

"I will use my role to complement the work of our Dáil team in holding this new Government to account but also to provide a voice for the Six Counties, alongside my colleague Elisha McCallion from Derry, and to advance the cause of ending partition.

"It is disappointing that the government here do not share the value Sinn Féin place on hearing and including voices from all communities from the north.

"If the Government parties are serious about building on the Good Friday Agreement, they ought to be including unionist voices in Seanad Éireann.

"In the last term, Seanadóir Ian Marshall made an invaluable contribution representing the unionist people of the north, and his views were always informative.

"I, as others in the new Seanad did, expected to see Ian back here, and I am deeply disappointed that the government decided to exclude unionists from the chamber.

"The Sinn Féin Seanad team will continue to work towards bringing change on both sides of the border. The new government’s attempts to undermine the people’s vote in February by excluding our party from government has not dampened the appetite for change.

"The British government and the unionist parties tried to exclude Sinn Féin from government in the north and failed.  I can assure the status quo in this state that their attempts to exclude us will not last forever either.

"Change is coming. We are the biggest party on this island, north and south – and the will of the people will prevail."