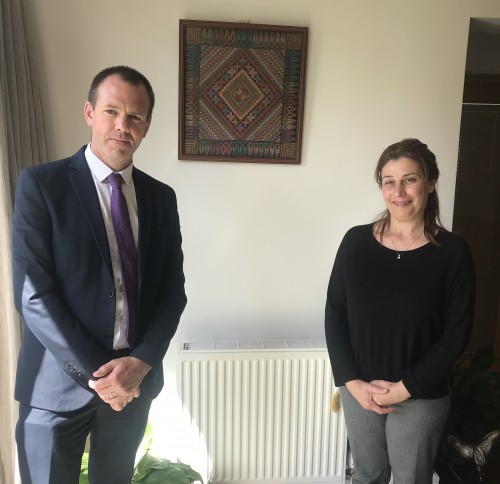 Sinn Féin spokesperson on Foreign Affairs John Brady has called on government to end its opposition to the Occupied Territories Bill after a successful meeting with the Palestinian Ambassador to Ireland Dr Jilan Abdalmajid today.

Speaking at Dr Abdalmajid's residence in Dublin, Wicklow TD Brady also urged government to use its position on the UN Security Council to do right by the Palestinian people.

Teachta Brady said: "I am delighted to have met with Dr Jilan Abdalmajid. An accomplished academic, vastly experienced with the detail of the Irish political arena, I would like to wish Ambassador Abdalmajid every success.

“This is an important time for the Palestinian people, who sit with the spectre of an impending Israeli annexation of part of the West Bank hanging over them, and also for our legislative assembly here in Ireland.

"The opposition of a single party Fine Gael - the Minister for Foreign Affairs Simon Coveney in particular - has halted the progress of the Occupied Territories Bill through the Dáil.

"That threatens to impede the efforts of the many concerned citizens of this state, who are appalled at the threat of the Israeli government to annex part of the Jordan Valley.

“Given the history of our own colonial subjugation, there is a deep and abiding sense of empathy, compassion and affinity with the plight of oppressed peoples across the globe among he Irish people.

"This is especially the case with the Palestinian people.

"Famously, we had the situation in the 1980s when ordinary workers in Dunnes Stores in Dublin refused to handle produce from the apartheid state of South Africa; a courageous act that resonated around the world.

"Now we are asking for a similar act of principle and courage from those whom our people have charged with law making on their behalf.

"The rationale for refusing to support the Occupied Territories Bill is wrong. The government is mistaken in its interpretation of EU regulations, and is acting contrary to the wishes of the Irish people.

"There are many individual TDs within the government parties who do not support the official line enforced by Fine Gael.

"I appeal to them to take heed of the examples and wishes of the Irish people, of their party spokespersons of the past, and to find the moral courage to stand with the Palestinian people.

"I urge them to support the efforts of those of us within what is a broad section of the Dáil and Seanad attempting to ensure that Ireland makes a stand for what is right.

“By securing a position on the UN Security Council, we as a nation now also have a real opportunity to be a catalyst for change.

"We have the opportunity to give voice to those in the world muted by the powerful forces of oppression.

"But if we lack the moral courage and the sense of our own history to do the right thing by the Palestinian people, I fear that the platform offers nothing but an opportunity for the government to proffer empty platitudes of self-congratulations.”