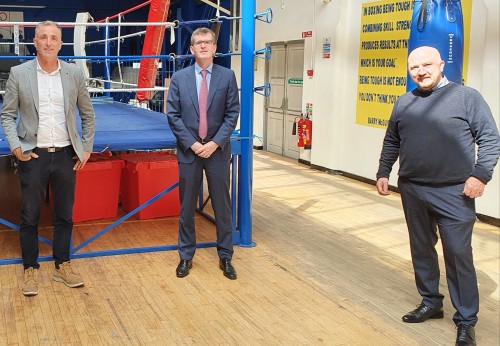 Sinn Féin Spokesperson on Sport Chris Andrews has called for greater state investment in amateur boxing to offer young boxers a healthy path to success in the sport.

The call comes after a meeting with Fergal Carruth and Ciaran Kirwan of the Irish Athletic Boxing Association.

Teachta Andrews said:  “At a time when so many young people in working class communities are in need of positive role models, we must do all we can to support our amateur boxing clubs and boxers, and uphold the positive impact they have had on society.

“It is clear that there is now a growing need for further investment in the IABA, for example an expansion of the High Performance Unit, which would have a multitude of benefits, both long term and short term.

“Boxing’s reputation has been damaged in recent times due to the involvement of the likes of Daniel Kinahan in the professional game. That influence cannot be allowed to overshadow a sport that has been such a huge force for good for generations.

“The reputational damage presents us with a challenge. Many of our young boxers now feel that they have no option but to turn to such promoters.

“We need to demonstrate that there is an alternative route to success in the sport, and support the hundreds of volunteers and coaches who are attempting to nurture talent in a healthy environment, with the right ethos, and with the well-being of our young people at the heart of all that they do.

"My meeting with the IABA proved insightful. The IABA has been central to Ireland’s success at various competitions across the globe, and has established amateur boxing as our most successful Olympic sport.

“The meeting provided an opportunity to discuss the positive impact that various boxing clubs have across communities with the high levels of socio-economic issues. These clubs provide a valuable resource to areas that have so often been forgotten by the state.

“Over the years, amateur boxing has produced more than its fair share of household names ranging from Michael Carruth himself, to Katie Taylor and Kellie Harrington.

“These are the kind of people our young boxers look up to. We owe it to current and future generations to afford them a chance to emulate those successes.

“With the appropriate levels of funding, we can further develop our Olympic team and push Ireland towards being a world leader in amateur boxing.”