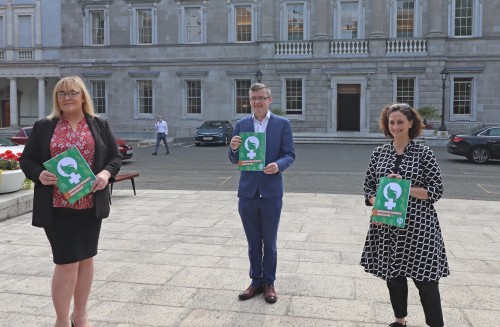 The policy document contains a series of immediate measures and Budget 2022 proposals which would deliver much-needed and long-overdue reform of the healthcare system to meet women’s needs.

It calls for a major overhaul of current healthcare systems in order to ensure women and girls can get access to the appropriate, modern services that they need in a timely way.

“Women’s healthcare needs simply aren’t being met under the current system and clear change is needed.

“Our document makes clear, detailed, and deliverable proposals to redefine healthcare in Ireland in a way that is modern and meets women’s needs.

“This includes ending maternity restrictions for partners and supporting individuals, as well as ensuring full public ownership of the new National Maternity Hospital.

“We are also proposing a universal contraception scheme for young women aged 17 to 25, which would be available from next year. The government has previously made vague promises about this and then failed to act. Women and girls cannot be expected to wait any longer. Sinn Féin would deliver this and ensure that this vital healthcare is available.

“We would advance inquiries into historical medical mistakes which have harmed women – namely the sodium valproate inquiry and a mesh implants inquiry.

“The issues that have arisen in relation to the ownership of the National Maternity Hospital are symptomatic of the problems with women’s healthcare in this state. To demonstrate that women’s healthcare is being prioritised the land on which the hospital is to be built must be brought into public ownership.

“In 2018, we launched a comprehensive policy outlining our Vision for Women’s Health which included measures to address period poverty. This issue has been ignored for too long. No-one should be forced to go without basic hygiene while menstruating. The government must act.”

“Advancing women’s healthcare means being serious about investment in women’s needs. Too often, the government is quick to give lip service but then fails to follow through with the investment and resources needed to deliver.

“This must include urgent investment in tackling gynaecology waiting lists, as more than 30,000 women are on waiting lists with half of them waiting 6 months or more. 1 in 4 are waiting more than a year.

“Sinn Féin would ensure that the review of the Termination of Pregnancy Act is woman-centric, and hears from those who accessed, sought to access, or delivered these services.

“A major failing of the current Government has been the CervicalCheck Tribunal. This scandal has severely damaged trust in the health service, and the lack of confidence in the Tribunal process is seriously undermining the commitments made to the survivors.

“Sinn Féin wants to redefine the relationship between women and the health service, and deliver top-class care across all areas, including maternity care and cancer care.”

“The National Breastfeeding Action Plan is a vital opportunity to support women who breastfeed, yet the government has failed to ensure that it gets the funding and resources it needs to be impactful. This must change.

“A Mesh Implant Inquiry must be created to establish the facts, the extent of harm, and develop a registry of the individuals affected. Women impacted have been expected to suffer in silence for far too long, while the state simply walked away.

“In a modern country, these delays should not be happening. Our policy document today sets out a clear and deliverable plan for ensuring women get the healthcare they deserve.”

'Advancing Women's Healthcare' is available to view at this link