Louth Sinn Féin TD Gerry Adams has extended solidarity to the large number of one parent families who held a protest today outside the Dáil against planned brutal cuts by the Labour leader Joan Burton to the Lone Parent Allowance. The cuts are due to come into force on July 2nd.

“The impact of this, especially on children, in Dundalk and Drogheda and Ardee and across the county will be significant. It will drive many more families into poverty.

“The Labour Leader Joan Burton claims that her cuts are about forcing lone parents to enter employment or education. When she announced the cuts, the Labour leader claimed that there would be affordable childcare and afterschool care.

“The reality is that for many parents’ childcare remains unaffordable. In addition, there are few jobs and many employers in the lower-paid sectors of the economy will not guarantee workers regular or sufficient hours.

“For many, the Burton cut will mean having to choose between putting food on the table or paying an electricity bill.” 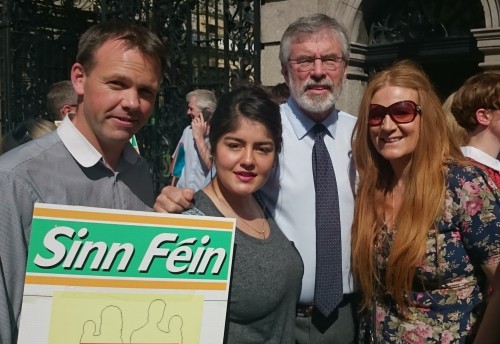