Statement of the solicitors attached providing information on the legal steps the family intend taking.

Sinn Féin Louth TD and Party Leader Gerry Adams today met the family of Seamus Ludlow to discuss their plans to step up their campaign for truth and justice.

Seamus Ludlow was shot dead in May 1976 by unionist paramilitaries. His body was found near his Thistle Cross, Dundalk home.

“I want to commend the steadfastness and courage of the Ludlow family, including those family members who have since died, in their determination to pursue justice for Seamus Ludlow.

“For 40 years the Ludlow family have valiantly campaigned for a public inquiry to establish the truth surrounding his murder.

“In the immediate days after his killing by a unionist paramilitary gang, linked to the Red Hand Commando/UVF and which involved two serving officers in the Ulster Defence Regiment, the family have been faced with resistance to an inquiry from the political and policing authorities on both parts of this island.

“Their treatment by An Garda Síochána in the aftermath of the killing was appalling. This included suspending the investigation, accusing members of the family of being involved in the murder, claiming that Seamus Ludlow was killed by the IRA as an informer, and not informing them of the inquest.

“Subsequently the Final Report of the Independent Commission of Inquiry into the Murder of Seamus Ludlow which was published in March 2006, accepted that collusion had occurred; and it recorded its disappointment at the lack of co-operation for information by the British authorities.

“The British government continues to refuse to hand over documents relating to the killing.

“This will surprise few given the recent British government decision in the Stormont House negotiation to use the ‘national security’ excuse to deny all victims of British state violence information and truth and closure.

“The Ludlow family refuse to be deterred. With their legal representatives they have mapped out a legal course of action that will challenge those who have tried to suppress the truth of what happened to Seamus Ludlow.

“Sinn Féin will do all we can to assist them in their endeavour.” 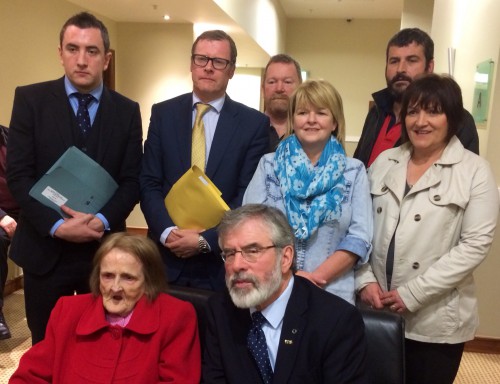 Meeting with Ludlow family as well as Kevin Winters and Gavin Booth, the solicitors for the family.