“Information I received in a parliamentary response from the Department this week indicated that only €1,607,946 of €5,500,000 in allocated government funding for traveller accommodation has been drawn down to date in 2016.

“It is a matter of concern that, on the basis of the figures provided, that some local authorities haven’t used their allocation for 2015 or drawn down their allocation for 2016 yet. For example, Clare County council was allocated €37,000 in 2015, recouped none of this from central government, was allocated €200,000 in 2016 and has not claimed back a cent yet. Similarly, Cork County Council was allocated €149,000 in capital allocations in 2015 and also recouped none for that year. In total in 2015, six local authorities were allocated funding that wasn't drawn down.

“Minister Coveney did state in his response that his Department is currently contacting every relevant local authority in order to ensure that drawdown is maximised. However I wonder if it’s now time to change the government’s approach towards how it allocates capital funding for the purposes of traveller accommodation.

“The government has stated it is increasing the funding available by €3.5m for 2017. However this funding is no good when it is not being utilised. Sinn Féin has stated in our Better4Housing policy document that the government should frontload funding for local authorities with a good track record of drawing down funding.

“The Minister must do more than pay lip service to the issue and he must find a better way of ensuring that adequate traveller accommodation is provided in a prompt manner by all local authorities.”

To ask the Minister for Housing, Planning, Community and Local Government the amount of funding allocated and drawn down by all local authorities for traveller accommodation in 2015 and to date in 2016; and his plans for improving the drawdown of local authorities in 2017 as a result of the funding increase announced in Budget 2017..


In accordance with the Housing (Traveller Accommodation) Act 1998, housing authorities have statutory responsibility for the assessment of the accommodation needs of Travellers and the preparation, adoption and implementation of multi-annual Traveller Accommodation Programmes (TAPs) in their areas.  My Department’s role is to ensure that there are adequate structures and supports in place to assist the authorities in providing such accommodation, including a national framework of policy, legislation and funding.
The capital allocations in respect of Traveller-specific accommodation for 2015 and 2016, and amounts recouped in 2015 and to date in 2016 are set out in the table below.  Typically, the bulk of expenditure occurs in the last quarter of the year, having regard to lead in times for planning, design and construction of capital projects.  To ensure maximum expenditure and delivery of accommodation, local authorities submit quarterly profiles of expenditure to my Department.  These are monitored against actual expenditure and if a difficulty is identified in drawing down funding allocated for a particular scheme during the year, it is reallocated to another scheme.  Expenditure during 2016 is being closely monitored and my Department is currently contacting every relevant local authority in order to ensure that drawdown is maximised.

Capital funding of €9m is being provided for Traveller-specific accommodation in 2017, an increase of €3.5m (64%) on the 2016 allocation.  This is the second consecutive year that the Traveller Accommodation capital budget has been increased. Included in this is provision to assist local authorities with the costs of capital works arising from the fire safety review of traveller-specific accommodation.
As regards the delivery of Traveller-specific accommodation and associated funding, theProgramme for Partnership Government commits to establishing a special working group to audit the current delivery and implementation of local authorities’ Traveller Accommodation Plans and consult with stakeholders on key areas of concern.  This commitment has been underpinned in Rebuilding Ireland – Action Plan for Housing and Homelessness, which provides for the commissioning by the Housing Agency of an expert, independent review of Traveller accommodation expenditure and delivery of units, having regard to the targets contained in the local authority Traveller Accommodation Programmes.  The review has commenced and is due to be completed in quarter two of 2017. The review will provide factual information and a key platform for the special working group to progress its work effectively.  The working group will be established as soon as possible after completion of the review. 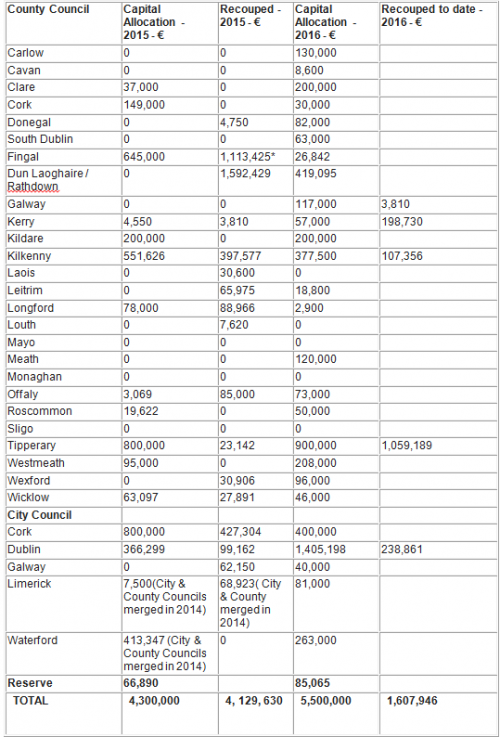