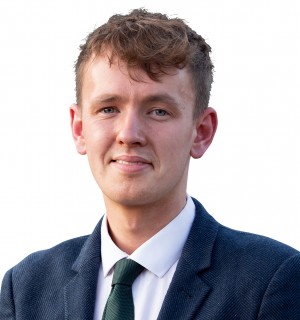 Pádraig Delargy is a 25-year-old member of Sinn Féin in Derry and MLA for Foyle.

He is a keen Gaeilgeoir with an interest in Gaelic football and Irish traditional music.

A graduate of Queen’s University and Ulster University with PGCE, Pádraig currently works as a Primary School Teacher in the city.

He has a passion for education and strongly believes that it offers young people an opportunity to determine their future and that it should be accessible to all.

In 2018, Pádraig played a key role in establishing the Patricia Hughes Bursary Scheme in memory of his late aunt. The scheme gives £4000 each year to pupils from low-income households leaving St. Columb’s College to support them through their time at university.

His priority for Derry is developing a first-class mental health service, improving third level education, building more social and affordable homes and delivering more jobs for the north west and advancing the conversation on Irish unity.

Pádraig is passionate about people’s rights and has a strong commitment to social justice and equality for all which he demonstrates as an active trade union member.

Delargy calls for quick progress on A6 road works13 January, 2023

Lack of beds in Altnagelvin a serious worry – Delargy4 October, 2022