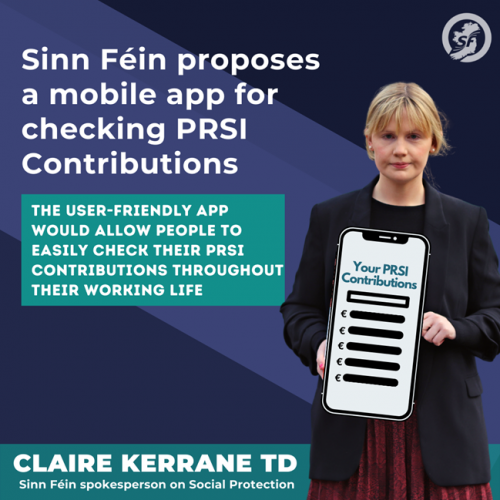 Currently, Ireland is one of only a handful of European states which does not provide communications regarding their contributions at regular intervals. A worker can seek a record of their contribution history through the Department of Social Protection and typically receive it by post however, this isn’t well promoted, it has to be applied for and it takes time to receive it.

Communicating the number of contributions a person has accrued throughout their employment would support with planning for retirement. Better communication around State Pension Contributory entitlements was one of the recommendations made by the recent Pensions Commission Report, but is yet to be acted on by Government.

“People rely on their PRSI contributions for a range of benefits at important times in their lives, such as leaving work temporarily to care for a loved one or after the birth of a baby, as well as on losing a job or getting sick. Yet, the vast majority of workers have no idea how many contributions they have.

“It is crucial that people can easily access information about their PRSI contributions so they can make sure they are on the right track for receiving their contributory State Pension, but also to allow them to be notified when they have accrued enough contributions to avail of services such as Treatment Benefit (eye test, dental check-up etc.).

“I have seen cases of workers, on reaching retirement age, belatedly finding out they did not have enough PRSI contributions to qualify for a full State Pension. At this point, it is too late.

"This is particularly important now that changes are coming in relation to the State Pension and how it is calculated with a move to a Total Contributions Approach. It would also be an important tool for Carers and Parents who take time out of work to care for a loved one, they should be able to see the credits they accrue and what it means for them in terms of their State Pension.

“While contribution histories can be requested from the Department, they are not provided to workers unless they know to request them and they can be difficult to read and understand.

“Sinn Féin want to make sure this information is easily accessible, regularly updated, and clearly communicated. We believe a mobile App would serve this purpose and could be integrated within existing online systems.

“It is important that in parallel with an App, an alternative option is made available for those who are not tech-savvy. We are proposing that this is done through personalised PRSI statements that are issued in paper form via An Post.

"This is the norm in many other EU countries, with workers receiving statements on their employment contributions, in some cases, every five years. Providing a similar service in the State can only be of benefit and would bring us up to speed with other countries.

“We know that people need to be better informed about their contributions, and about how one qualifies for the State Pension and other social welfare entitlement throughout their working life.

“This proposed App would put information on PRSI contributions at workers' fingertips.

"This is a proposal I have made to Minister Humphreys previously and I intend to send her our proposal for her consideration."

The proposal paper is available to view here