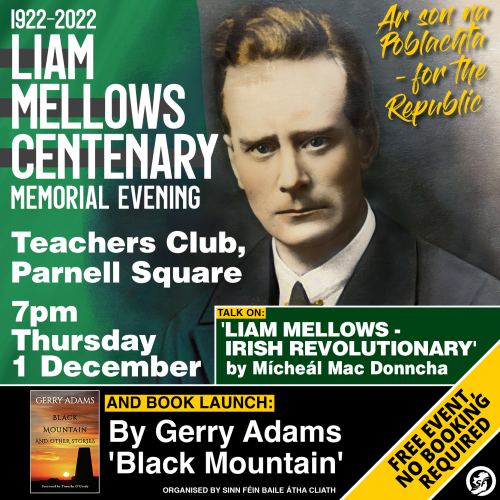 Former Sinn Féin President Gerry Adams will address a Dublin audience for the first time since the pandemic on a special evening to mark the forthcoming centenary of the execution of Republican leader Liam Mellows.

In the Teachers Club, Parnell Square, on Thursday December 1st at 7pm, there will be a Liam Mellows memorial evening. Dublin City Councillor and historian Mícheál Mac Donncha will give a talk on Mellows.

This will be followed by the Dublin launch by Gerry Adams of his book ‘Black Mountain’, stories of friendship and comradeship, conflict and peace, past and present.

Speaking in advance of the event, Cllr Mac Donncha said:

“Liam Mellows is a key figure in the story of Irish Republicanism. A freedom fighter who, like James Connolly, understood that freedom for the Irish people, to be meaningful, must be social and economic as well as political.

“We mark his centenary to promote his aim of a United Ireland, the fulfilment of the Irish Republic proclaimed in 1916 and defended by Liam Mellows and his comrades in 1922.

“It is especially appropriate that we also welcome Gerry Adams to launch his latest book. Gerry has been a Republican leader who has followed in the tradition of Liam Mellows and developed that tradition and promoted those ideas all his activist life, ensuring the strength of Sinn Féin and of the Republican vision for Ireland today.”