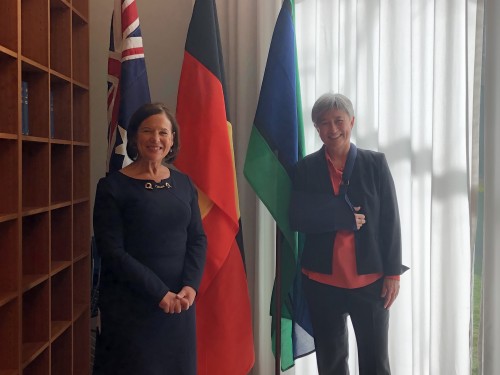 Ms McDonald said “I was delighted to meet with Minister Wong.  It is important that we strengthen and deepen the important relationship between Ireland and Australia politically, economically and socially."

Over the last number of days Ms McDonald met with Ministers Brendan O’Connor and Bill Shorten, and Assistant Ministers Ged Kearney, Emma McBride, Stephen Jones and Jenny McAllister.  She also met with members of the House of Representatives and Senate including Senator Patrick Dodson, special envoy for Reconciliation and with many representatives at State level.

“Today’s meeting with Minister for Foreign Affairs Penny Wong was an opportunity to discuss the impact of Brexit, concerns about the intention of the British government to breach international law and the importance of the Irish Protocol to prevent a hard border in Ireland and protect the Good Friday Agreement.  We also talked about the wider process of change which is underway on the island and I outlined the need to prepare for Irish re-unification.

“These are conversations which also took place with a range of political representatives at federal and state level, with academics, the business community, trade unions and very many Irish people who are living and working in Australia.

“There is a long history between Ireland and Australia and now is the time to deepen these relationships in the interests of our peoples.”