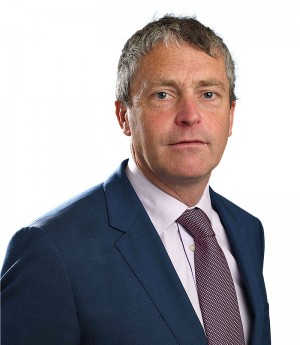 Pa grew up in Tralee and was educated at CBS The Green Tralee, UCD and the Law Society.

He qualified as a solicitor in 1996 and worked in the United States for the Georgia Indigent Defense Council before moving back to Ireland.  In 2002 and 2003 he travelled to Colombia to act as an independent legal observer for the trial of the Colombia 3.

Pa established his own solicitor’s practice in Rock Street, Tralee in 2003, across the road from where his family ran Fitzgerald’s grocery shop for many years.

He was selected as the Sinn Féin Dáil candidate for Kerry in August 2019, replacing Martin Ferris TD. At the subsequent election, he was elected on the first count, and since then he has  focused on supporting workers and the vulnerable. He is the Sinn Féin spokesperson for Equality, Law Reform and Integration, and serves on the committees for Justice and the Irish Language, the Gaeltacht and the Islands.

Married with four children, Pa is involved with Tralee Dynamos, where he currently coaches their u13s. He is also a member of Na Gaeil GAA club.

Government must move fast on right of audience ruling - Pa Daly TD31 May, 2022