Many things unite us but it is hard to find a shared identity – Independent.ie - Paul Moran, 2021

Majority favour a united Ireland, but just 22pc would pay for it – Independent.ie - Fionnán Sheahan, 2021

Brexit is a salutary tale on poorly explained votes – and affection for the NHS would become a key issue – Independent.ie - Fionnán Sheahan, 2021

Drop the tricolour and create a new flag to respect both sides – poll – Independent.ie - Fionnán Sheahan, 2021

‘A united Ireland will happen in the foreseeable future — but a shared island will be a different country’ – Indepndent.ie - Mary Kenny, 2021

A unionist vote for new leader that could spell the end of the Union - Irish Daily Mail - Leo McKinstry, 2021

Reunification will ask taxing questions of our republic - The Sunday Independent - Colm McCarthy, 2021

Pragmatism outweighs patriotism for most on the subject of a united Ireland - The Sunday Independent - Paul Moran, 2021

If Edwin Poots tried to crash the Assembly, it would open the door to a border poll – Slugger O’Toole - Brian Walker, 2021

Real debate on implications of Irish unity must be faced – Independent.ie – Editorial, 2021

The North’s £9.4bn subvention and the cost of Irish unity - The Irish Times - Eoin Burke-Kennedy, 2021

Practicalities will trump identity and ideology in any referendum - Belfast Telegraph - Allison Morris, 2021

How could a vote on the unification of Ireland play out? - The Guardian - Lisa O'Carroll, 2021

The five most challenging issues on the agenda for next leader – Belfast Telegraph – Gareth Cross, 2021

Power-sharing in doubt after Foster quits - The Times - Patrick Maguire, 2021

Northern Ireland centenary might just be the right time for a different type of unionism - The Independent - Chris Hudson and Graham Spencer, 2021

IF DUP GETS THIS WRONG, IT COULD BE DEATH KNELL FOR THE UNION - Daily Mail - LEO MCKINSTRY, 2021

Resignation is the denouement of a leader who could not lead in this changing political landscape - Belfast Telegraph - Andree Murphy, 2021

Letter: Wishing away the debate on Ireland’s future will not work - Belfast News Letter - Patricia MacBride, 2021

After Arlene’s leadership implosion what comes next for the DUP and Northern Ireland? - Slugger O'Toole – Mick Fealty, 2021

Susan O’Keeffe: United Kingdom or a united Ireland? Next DUP leader will have to face up to the debate - The Business Post - Susan O'Keeffe, 2021

As those in favour of Irish unity grow in numbers, the stars move closer to aligning – Irish Independent - Martina Devlin, 2021

Demographics ensure that reunification is inevitable so we need to prepare - The Sunday Times - Cormac Lucey, 2021

Major poll to reveal what unites and divides the island on centenary of Irish partition – The Independent, 2021

NI would vote in stay in UK if border poll was held, according to survey - The Irish Examiner - DAVID YOUNG, 2021

Everything points to a Scottish ‘date with fate’ which will have major impact here - Independent.ie - John Downing, 2021

Neale Richmond: No discussion can be off the table when it comes to a shared island - The Business Post, 2021

Northern Ireland will leave UK within 25 years, say majority of people on both sides of border - The Telegraph Online - Tony Diver, Political Correspondent, 2021

Majority of the public in Northern Ireland believe it will have split from the UK within 25 years, poll finds - Mail Online - Jack Maidment, Deputy Political Editor, 2021

A paradigm shift is afoot and if Scotland secedes, what Union is there to fight for? - Irish Independent - Martina Devlin

Everything points to a Scottish 'date with fate' which will have major impact here - Irish Independent - John Downing, 2021

'In my generation, the divide is not green and orange': the young people tackling prejudice - Irish Independent - Ellen Ryan, 2021

Johnson 'must change tactics' for future of UK - The Times - Mark McLaughlin, 2021

Paul Hosford: Grasping the nettle of a shared island concept Political apathy is no longer a valid stance, as violence on the streets of Belfast is everyone's responsibility on this island. - The Irish Examiner, 2021

Peace in Northern Ireland is in danger – Johnson’s lies and inaction offer no help - The Observer - Jonathan Powell, 2021

The DUP’s attachment to tactics has got Northern Ireland in a strategic mess - Left Foot Forward – Peter McColl, 2021

Johnson's trade deal may be paving the way for a border poll – Independent - Mary Dejevsky, 2021

The tone and economics of Northern Ireland’s political debate has to change - Slugger O'Toole - David McCann, 2021

For the sake of future generations, we simply cannot go on like this… - Slugger O'Toole - Samuel Thompson, 2021

Unionists and loyal orders must avoid mistakes of the past - Belfast Telegraph - Alex Kane, 2021

Rallying behind old slogans will not help unionism now; Another climbdown is the probable outcome of latest coming together of unionists to oppose NI protocol - The Irish Times - Alex Kane, 2021

McDonald marks Easter Sunday be reissuing call for Irish reunification: The Sinn Féin leader urged political leaders to 'show an ambition that matches the hope of a generation rising up' and prepare for Irish unity - The Irish Examiner – Aoife Moore, 2021

Will debates about the Irish flag obscure the dialogue around a united Ireland? - TheJournal.ie, 2021

Tricolour’s status as national flag could be ‘up for discussion’ - The Irish News, 2021

We cannot put off doing our homework on a border poll any longer - Colin Harvey, 2021

Which has a higher standard of living – Northern Ireland or the Republic? - Eoin Burke-Kennedy, 2021

On the centenary of Northern Ireland’s birth, let’s imagine a potential rebirth of Ireland - Rosemary Jenkinson, 2021

Column: Irish reunification is an opportunity to reset the economy and confront the climate crisis - TheJournal.ie - Seán Fearon, 2021

Varadkar suggests ‘joint-sovereignty' for Northern Ireland for a period could be part of United Ireland negotiations - irishmirror.ie - Paul Moore, 2021

Setting an early date for a border poll would be 'wrong' — Tánaiste - The Irish Examiner - Paul Hosford, 2021

Jim O’Callaghan: Dáil or Seanad could move to Belfast in a united Ireland - The Business Post – Aiden Corkery, 2021

Open Newsroom: What could a shared island look like? - TheJournal.ie - Brian Whelan, 2021

Sam McBride: A failure of unionist diplomacy has left it more isolated than for decades - Sam McBride, 2021

The Northern Ireland Protocol could be the best way for unionists to save the Union, says leading businessman - Belfast News Letter - Sam McBride, 2021

Explainer: What is the Taoiseach's Shared Island Unit up to? - TheJournal.ie - Gráinne Ní Aodha, 2021

We cannot put off doing our homework on a border poll any longer - Colin Harvey, 2021

If we want a united Ireland, we must start having the boring conversations now - Aoife Moore, 2021

Column: Irish reunification is an opportunity to reset the economy and confront the climate crisis - Seán Fearon, 2021

FactFind: How could a border poll happen? - Rónán Duffy, 2021

Will the old tactics still work for Unionists in Northern Ireland? - Susan McKay, 2021

Is the United Kingdom on the brink of a break-up? - Julie Etchingham, 2021

In Northern Ireland, a ‘shift in enthusiasm’ for Irish unity - Ruairi Casey, 2021

Ben Lowry: Unionists have fully turned against the Irish Sea border because since January they have seen the scale of the disaster - Ben Lowry, 2021

We could all learn thing or two from clever and respectful young leaders - Fr Martin Magill, 2021

Why the Eurosceptics will fail in bid to scrap protocol - Sean O’Grady, 2021

Ben Lowry: Amid Irish Sea border crisis, Peter Robinson has long experience of what is and is not politically feasible - Ben Lowry, 2021

Change is coming and Republic needs to talk to North about it - Denzil McDaniel, 2021

Defensive and oppositional – the DUP is completely out of touch with Nothern Ireland’s ‘peace generation’ - Abby Wallace, 2021

When should the UK call a border poll in Ireland? Calls for clarity on this 'quite remarkable' question - Rónán Duffy, 2021

Is the tide turning on Irish reunification? - Ian Johnston, 2021

Writing is on the wall, it’s time for a Northern Ireland border poll - Irish Voice Editorial, 2021

British government 'must lay out its criteria for holding a border poll' - Claire Simpson, 2021

My generation deserves to have its say on Irish unity now - Emma de Souza, 2021

The bill for Boris Johnson’s Brexit is coming in and it’s punishingly steep - Andrew Rawnsley, 2021

Unleashing nationalism has made the future of the UK the central issue - George Osborne, 2021

Referendum on Irish unity is coming down the tracks faster than most expected - Brendan O'Leary, 2021

A referendum on Irish unity is coming, whether we like it or not - Brendan O'Leary, 2021

Questions around Irish unity referendum to be examined in new initiative - Ronan McGreevy, 2021

The Malign Incompetence of the British Ruling Class - Pankaj Mishra, 2019

Doherty calls for campaign for Irish unity to be stepped up - Aine McMahon, 2020, Aine McMahon

‘It is absolutely crazy to think that constitutional change in Ireland would happen overnight’ – Paul Gosling, 2020, Paul Gosling

ESRI: Voters, North and South, must be fully informed ahead of any border poll – Eamon Quinn, 2020, Eamon Quinn

A progressive, united Ireland seems more likely than ever – thanks to the DUP, Séamas O’Reilly Guardian, Opinion Piece, 2019, Séamas O'Reilly

Taoiseach says he is not in favour of ‘divisive’ poll on Northern Ireland border - Aine McMahon, 2020, Aine McMahon

The time has come for unionists to decide what kind of United Ireland they can accept – Shane Greer, The Telegraph Comment, 2020, Shane Greer

How coronavirus is spurring the cause of a united Ireland, Una Mullally, The Guardian Opinion, 2020, Una Mullally

57% of people in the south want a referendum on Irish unity in the next five years - IPSOS-MRBI exit poll, 2020 Irish Times, More-than-half-of-voters-want-border-polls-north-and-south

75% of young people want a referendum on Irish unity in the next five years! - IPSOS-MRBI exit poll, 2020

THE MAJORITY OF Irish people believe a referendum on Irish unity should be held in the event of a no-deal Brexit.

Responding to a poll for Claire Byrne Live/Amárach Research, 44% of people said they felt that a referendum on a united Ireland should be held.

Sinn Féin has a vision of a new and united Ireland, firmly rooted in the republican values of equality, fraternity and liberty. We want an inclusive Ireland in which the diversity of identities on our island is embraced, protected and celebrated. This must include those who cherish and celebrate their British identity.

Concerns have been raised about the protection of non-Irish identities in a new and united Ireland.

All proponents of Irish unity must listen to these concerns. Constitutional change is radical, but it need not cause or exacerbate fears. Unionists fears must be heard and addressed in this debate.

No one’s identity should ever be challenged by constitutional change. Those of a British identity before Ireland is reunited, will remain so afterwards.

A new and united Ireland must be a place for all, a united Ireland that is home if you are Irish, British, both or neither. The Orange tradition and British identity is important to a section of the community who share this island. It is therefore important to us all.

The Good Friday Agreement not only provides a peaceful and democratic pathway to Irish unity, it also provides a model regarding rights and parity of esteem for identity, regardless of national allegiance, for all those living in a new and united Ireland.

Sinn Féin acknowledges the real need for all those who wish to see a united Ireland to engage with our unionist neighbours. We must listen to and engage with their hopes and fears regarding unity. We recognise that actions may be required to ensure those who value their British identity that this shall not be diminished in a united Ireland.

As such, Sinn Féin is committed to; 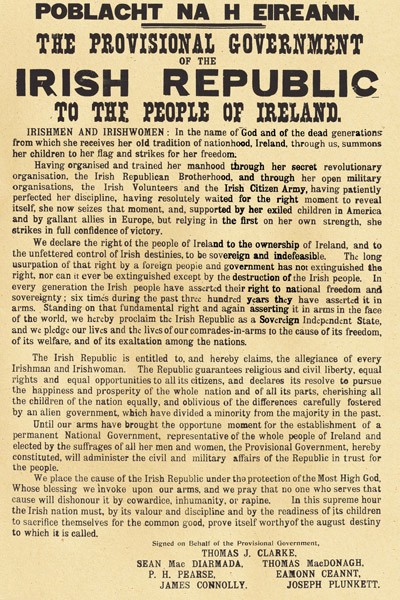 Significant Interventions on the subject of Irish Unity